You are here: Home / Marriage 101 / How To Have A Happy Marriage / Dr Oz and Wife Lisa’s 5 Tips For Lasting Love

We take a peek at the private lives of Dr. Oz and his wife Lisa. 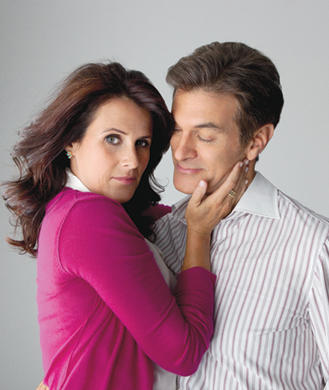 The handsome 51-year-old Dr. Mehmet Oz—bestselling author, TV personality, and renowned heart surgeon—struts into the studio for his SHAPE cover shoot and greets his wife, Lisa, 48, a mother of four and herself the author of a bestseller, with a kiss and a tight squeeze. The spark of excitement between them is palpable even after 26 years together. “I’ve always thought Lisa was sexy,” says Dr. Oz. “I brag about her all the time. “

They even “met cute” in a charming spin on an old-fashioned arranged marriage. Their parents introduced them when Lisa was in college and Mehmet was attending medical school. They dated for six months before deciding to tie the knot, and got married two and a half years later.
If, like us, you’re asking, “Can this marriage really be so storybook perfect?” Lisa sets the record straight. “No relationship is flawless,” she says. “But if you’re committed and willing to put the work in, it can thrive.” Despite a quick courtship, two over-the-top busy careers, and four energetic kids, the Ozes remain stronger than ever, which means they have plenty to teach the rest of us about how to keep a marriage humming—not to mention healthy. So whether you’re looking for love, starting the first blush of a romance, or in it for the long-term, their time-tested advice will help you build a better partnership.
1. Focus on the Positive

Lisa is the first to admit that the yellow brick road in the land of Oz has had its bumps. “We’re pretty much like any other couple,” she says. “We fight—a lot—and there are times when we’re bored with each other.” Her solution? Remember what you love about your spouse, not what irritates you. “Whenever he’s doing something that’s driving me crazy, I think about one of his traits I absolutely adore,” she says. “For example, I’m insatiable when it comes to being with him, so my main complaint is that we never have enough time together. The positive side of that is I love how open and available he is to other people who need him.”2. Take Charge of Your Own Happiness

“Still, it’s important to remember that no matter how much you want to be with each other, you can’t satisfy all of your partner’s needs,” says Dr. Oz. For years I wanted Mehmet to work less and play with me more,” says Lisa. After initially blaming him for her own boredom, it finally dawned on her that she had to create her own bliss. “I’ve come to realize you can’t sit around and wait for the other person to do the things you want to do. If you want him to be more romantic, be more romantic yourself. In other words, light your own damn candles!”
3. Share Your Passions

Living a healthy lifestyle was something the couple bonded over from the get-go. A vegetarian since she was 15, Lisa incorporates brightly colored, plant-based foods into every meal she makes. “I was lucky enough to marry a wonderful chef,” says Dr. Oz, who eats fish and poultry when he’s away from home. “Lisa makes the food playful and tasty.” She also introduced her husband to trainer Joel Harper, who works with them together and individually. To get their four kids—Daphne, Arabella, Zoe, and Oliver—excited about exercise when at a young age, the family invented the Oz Olympics, which highlighted each of their abilities. “Some were better at throwing balls, some were faster at running,” says Lisa. “So Mehmet developed game-like competitions where each child could win a medal. That’s how we spent many evenings when they were little.”

4. Show Some R-E-S-P-E-C-T
No matter how head over heels you are in the beginning of your courtship, eventually you’re going to discover that relationships are hard work. “You’re super-attentive and sweet to each other at first,” says Lisa. “But after a few years, it’s easy to forget to say things like ‘thank you’ and ‘please.’ Sometimes you’re nicer to a complete stranger than you are to your spouse!” Empathy and thoughtfulness are key to getting through tough times together, says Dr. Oz. “It’s difficult to love someone you don’t respect, which is hard to remember when you’re having an argument. Lisa knows how to push my buttons. She doesn’t do it on purpose, but it happens. Then we fight and make up.”
5. Get Physical
And that’s where the sex comes in. “My prescription for sex…” Dr. Oz begins, “…is to have it as often as possible!” finishes Lisa, laughing. The Ozes strongly believe in keeping the home fires burning brightly. In fact, says Lisa, “that’s a perfect metaphor. It’s much harder to reignite a flame once it’s dead. You have to make intimacy a regular part of your life.” So how often does the doctor recommend a couple get busy? “Two to three times a week,” he says. (Lisa says six, but who’s counting?) Besides the pleasure factor, says Dr. Oz, “sex helps you live longer. It’s been scientifically proven that twice a week equals three more years of life.” ’Nuff said!